Wishing my friend and author Preethi Venugopala, the best upon the release of the second book of her Sravanapura Royals series. The first book, A Royal Affair had ruled the bestseller lists upon its release and true to her unique style and voice, the new book has also claimed its rightful place among the romance bestsellers in multiple markets!

Really delighted and proud to be spotlighting the blurb and excerpt of the book below:

A Princess in love with a Bollywood Superstar

Saketh Rao aka SR, India’s latest Bollywood heartthrob, has bagged the role of a lifetime: to play Hari Varman, the doomed royal scion.

When he arrives at Sravanapura Palace with his director friend Rajeev Ratnam, little does he know that his life is about to change forever!

Princess Kritika is overjoyed that Saketh Rao will play the role of her ancestor. But when she comes face to face with the arrogant superstar she is determined to scuttle the project.

Fate, however, has different plans for them. The feisty couple is soon head over heels in love with each other.

As they uncover the secrets of Hari Varman’s life, Saketh makes a discovery that can rip them apart and their new-found love.

Will the secrets and lies of the past deny them a future together? Or will they overcome the obstacles to true love?

Get the book from Amazon by clicking here 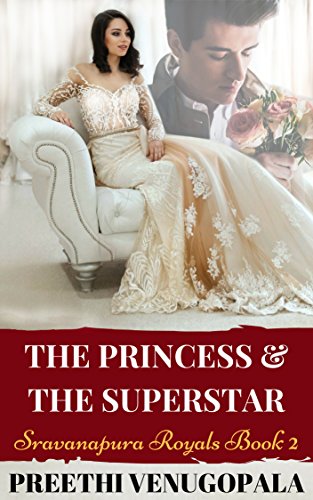 Kritika checked the time. It was nearing seven thirty. She was a bit late than usual. But she still had plenty of time to pamper herself and get ready to meet the superstar, who seemed to have won hearts all over the world if she were to believe the fan videos posted on YouTube and various blogs. Yes, she had shamelessly checked the many YouTube videos about him to know more about him. It seemed perfectly normal to stalk his Twitter and Facebook page. He had come across as a friendly and warm person who retweeted his fans often and replied to interesting comments on his FB Page.

She knew half of his persona online was created by his PR team. His social media profiles might be maintained by dedicated teams who would present only the best aspects about him to the public. The real Saketh Rao might turn out to be a total jerk. Yet, she was looking forward to meeting the star in person and decide for herself.

When she stepped on to the road that led to the residential wing of the palace, she was surprised to hear the horn of a car. She whirled around and watched as a silver Mercedes Benz came around a bend in the road and raced towards her.

Vijay had renovated a number of unused rooms in the palace and turned them into luxury hotel suites, thus creating one more gem in his hotel business chain. The only snag in the entire setup was that guests often sneaked into the palace’s residential areas, even though they were marked as no entry zones and had to be turned away by the palace guards. And it irked her very much. She wondered how this car had escaped the scrutiny of the guards. She needed to talk with the head of security. But for now, she would tackle this herself.

She gripped the straps of her backpack and stood in the middle of the road facing the car that seemed to have no intention of slowing down. It came to halt at a mere metre in front of her and she heard the driver swear. She narrowed her eyes and continued to stare at the car, daring the occupants to come out and face her. The passenger door of the car opened and a handsome youth, who looked as though he was jet-lagged and badly in need of a leisurely bath and sleep, got out. He seemed vaguely familiar, but she couldn’t place him immediately.

“Please, miss. May I know why you are blocking our path?” he asked, his mellow tone bringing Kritika’s anger a few notches down.

“This road leads to the residential areas of the palace and is not accessible for guests at the hotel. Kindly turn around and go away.”

“Enough, no need to explain.” Kritika raised her right hand to stop him from talking any further and snapped at him. The fact that he was trying to justify his action, brought her anger back.

“As I said, I don’t want to hear any further explanation. Instruct your driver to reverse the car and get the hell out of here.”

The driver of the car opened his door and got out. Kritika’s jaw dropped and her mouth formed an O because she recognised the driver instantly. Saketh Rao, clean shaven, casually attired in a t-shirt and jeans, all six feet two inches of male glory. He removed his sunglasses and walked towards her, his lips curved into his characteristic lopsided smile. He was clearly enjoying her distress. And then the last piece of the puzzle fell into place when she recognised the handsome youth with him as Rajeev Ratnam. Kritika felt her heart racing. If Saketh came near her now, her excited heart would undergo a heart attack.

“Who are you to block our path? We have the adequate permission papers and we were let in by the guards. Move your heavy butt out of our way and allow us to pass.”

His arrogant talk snapped Kritika out of the trance she was falling into. The arrogant snob.

And he had made a personal comment. About her butt!

“Are you going to get in? Why are you listening to this annoying, attention seeking female?” Saketh was ignoring her outright and addressing his friend.

“How dare you?” Kritika took a step forward and slapped him. He stopped her hand in mid-air and in one swift move, yanked her towards him, momentarily taking the wind out of her lungs.

When she attempted to step back, he tightened his grip on her arm and held her other arm with his right hand. His nearness was doing strange things to her composure. His touch was making her heart stutter, sending electric impulses rushing through her body.

If it was not for the revulsion he had evoked with his arrogance, she certainly would have enjoyed the sensation of being held by him. But now, she regretted the hours she had spent browsing the internet to know more about him. As she had feared, he had turned out to be an outright jerk. She didn’t want to waste her energy arguing with him.

She pushed him with all her strength and then broke into a run, determined to never to cross his path again. She heard him chuckle and it enraged her further.

She wanted to see how they were going to make a film about her ancestor. She would see to it that it got an early grave.

Hope you liked the excerpt! Don’t forget to check the book on Amazon Kindle