For a country that has been programmed to understand their history from a Delhi-centric perspective, books focussing on other empires give a refreshing point of view. It is not only about expanding the scope of the historical study, but also about understanding the chain of historical events from a grounded position.

The book about Madurai Sultanate piqued my interest, given my ongoing research on South Indian history. (Also, read my review of Gods, Kings and Slaves, the siege of Madurai where  Venkatesh Ramakrishnan gives a gripping prelude to the fall of Madurai to Islamic invasions).

Madurai Sultanate is a quick and short read that covers the history of Madurai from the rise of Kulashekhara Pandya whose rise is marked by his victory over the Cholas and elaborates on the fraternal conflict between his sons Sundara Pandya and Veera Pandya. The book also elaborates on the incessant efforts by the generals of Alauddin Khilji. We also get to know about the various bouts of resistance offered by different Hindu Kings. To my pleasant surprise, I found a good amount of detail about Veera Bhallala of Hoyasalas and Pratapa Rudra of Warangal. 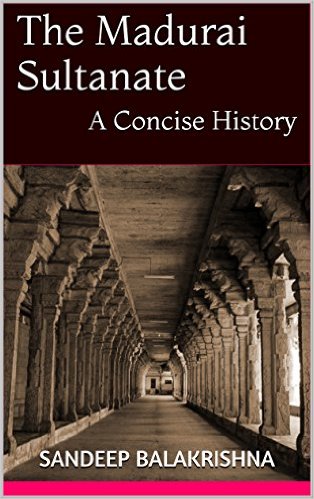 1. The topic deals with a region often ignored in the mainstream history. The importance of studying Madurai Sultanate is not about how long the empire survived. As the author rightly opines, the negligible run the Sultanate got was ridden with palace conspiracies, fratricides and continuous rebellions from all sides of the borders. But the topic’s significance has more to do with continuous resurgence offered by the Hindu Kingdoms, a point that many historians have consistently failed to highlight.
2. Detail covered. As a history enthusiast, I do start any history text with some amount of background reading. I was agile about any detail being left out by the author in packing so much information. Trust me, he impresses. The only detail he left out was probably the names of Telugu resurgents like Kapayya Nayaka and Vema Reddi when the narrative briefly touches the come back by Warangal after Prataparudra’s death.
3. Research. The author takes care to quote from a lot of accounts right from the records of ancient travellers like Ibn Batuta and Ferishta to the modern historians like RC Majumdar and Nilakantha Sastri. The quotations are diligently placed making the historian in the reader more and more thirsty for further research and reading
4. Flow and language. Pages keep turning effortlessly and a quick reader can finish the book in about an hour or two but is very much enriched. I got to know the names of so many kings about whom I have never heard. I could see the myriad problems faced by the Delhi Sultanate even as it tried to expand its course. It is really hard to believe that so much is stored in a 43 page short read. Any mainstream historian could have written the same information in two volumes in flowery language that takes a reader days weeks to complete.
5. Tone of the narrative. Let us face it. Some accounts by older historians about Islamic invaders are gory and disgusting. But the author’s dealing with these gory details of various invasions were dealt with an admirable amount of dispassion. The reader does not get to hear the voice of author till the final section he gives his takeaways from the account. Even there, not much is there to disagree with him.

About the author :  Sandeep Balakrishna is the Editor of IndiaFacts Research Centre. He is the author of Tipu Sultan: The Tyrant of Mysore and the English translator of S.L. Bhyrappa’s Aavarna. He is also an active columnist on issues related to history and culture of India.

Buy this book at amazon. The author confirms that only a Kindle edition is available currently.

2 thoughts on “Book Review of Madurai Sultanate, a concise history by Sandeep Balakrishna”